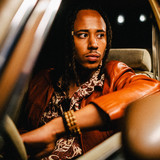 In an era where many artists are encouraged to find one thing they do well and stick to it, Montréal-based singer/songwriter/rapper Zach Zoya is in a constant state of progression. Growing up in the small, largely French-speaking city of Rouyn-Noranda northwest of Montréal, Canada, Zoya developed a diverse musical palate from his family. Introduced to African music by his South African father who fled to Canada during apartheid, and North American soul and pop music by his French-Canadian mother, Zoya was immersed in rhythms and melodies that spoke to him even when the English lyrics didn’t. Establishing himself as both a technically skilled, silver-tongued rapper, and a songwriter capable of unspooling knotty emotions through smooth vocal refrains, Zoya has collaborated with top-shelf producers including multi-GRAMMY Award-winning producer Boi-1da, JUNO Award-winning producer Matthew Burnett, Multi-Platinum producer Don Mills (Juice WRLD, Giveon), and Platinum producer High Klassified (Future, The Weeknd). His ability to write unique replay-worthy rhymes, create elite visuals, effortlessly flow from rapid rap verses to smooth R&B vocals, and deliver high-voltage live performances leaves no room for doubt that Zach Zoya is the next emerging Canadian artist to develop a worldwide following.