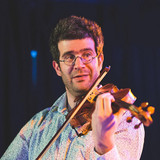 Gabriel Bismut is a Parisian violinist and violist playing jazz and traditional music. After his studies at the Regional Conservatory (CRR) of Boulogne-Billancourt, he was in contact with internationally renowned jazz musicians such as Antonio Ciacca and Carine Bonnefoy. He has also worked and recorded with musicians from the Parisian scene such as Camille Bertault, Helena Recalde, Charlotte Wassy, Mauro Repetto and The Big Hustle. In 2016 he recorded an album containing his compositions with pianist Fady Farah. In 2017, he started playing with pianist-accordionist Maurizio Minardi. The ensemble further developed into a quartet and after 2 years of work and more than 50 concerts in France, Italy and Belgium, they recorded an album under the artistic direction of Marc Berthoumieux. Released in November 2020 (AMA Recording, Inouïe distribution), it has received financial support from ADAMI and FCM. Gabriel Bismut has performed more than 300 concerts in France and in Europe. He has performed in festivals such as the Festival de l'Europe, the Maderna Jazz Festival and the Souillac festival and in large concert halls such as the Carré Bellefeuille in Paris (opening to the trio of Shai Maestro). Gabriel also

gives lessons in jazz and improvisation, and he teaches violin in a music school in Paris. Moreover, he has recently started posting instructional jazz violin videos on his YouTube channel. More info at https://gabrielbismut.com/