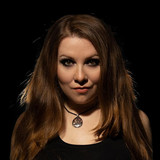 WOODSCREAM is Russian folk metal band from Saint Petersburg, that began its journey in 2006 and continues actively developing its style and music. In the beginning music and lyrics of the group, inspired by the Swedish folk metal bands, had a pronounced Scandinavian color, which over time was supplemented by Western European motifs. Now group is actively working on a new music, rapidly diverting its sound to the world of Russian culture. The membership and instruments used by WOODSCREAM have changed a lot over the years. Once the band consisted of seven people, and the leading melodic instrument for a long time was the violin. Now the group has established itself in its permanent membership and, working on a new music, band is experimenting with various folk instruments and atmospheric soundscapes. At the moment, WOODSCREAM music is a powerful metal with enchanting ethnic motifs, Russian lyrics and strong female vocals, leading the listener into the world of fairy tales and legends. The band is one of the brightest representatives of Saint Petersburg metal, released several singles, EP and two albums, participated in international music festivals in Russia and abroad, sharing the stage with many artists who are in the first line of the world metal scene, such as Korpiklaani, Thyrfing, Arkona, Eluveitie, Tyr, Suidakra, Svartsot, etc.