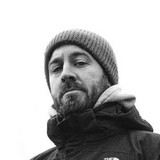 Aver aka Joey Average is a hip-hop artist from Manchester now living in Berlin. He began making music in 2004 with his childhood friends, Chalk & Bill Sykes, as part of The Natural Curriculum (TNC). They began slowly building their rep as a live act on the Manchester hip-hop scene before beginning to release their own music independently on vinyl. Aver's first official album came in 2011 as part of Dayse & Aver, a splinter group of TNC, which saw him provide the heavy dystopian beats that served as the backdrop to Dayse's intelligent, sharp lyricism. This style of moody, dark yet futuristic instrumental work would become the main focus of Aver's work for the next decade, taking cues from Portishead, Company Flow and DJ Shadow alike. In October 2016 Aver moved to Berlin. During his first six months in Germany, Aver had been working relentlessly on making beats and had amassed the bulk of what would go on to be Die Berlin Dateien, his first full-length instrumental LP with Village Live. Aver began collaborating with a number of jazz musicians to further flesh-out his instrumental work and in the following year built Dressed For CCTV, his second release with Village Live. This collaborative process took a life of its own whilst the group rehearsed to play Dressed For CCTV live. They began improvising and writing their own songs under the name Move 78 and have since recorded their debut album, scheduled to be released on Village Live Spring 2021.