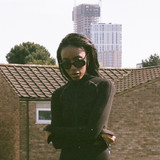 After developing a strong passion for music from an early age, it did not take Jaydonclover long to discover her incredible vocal ability. Growing up surrounded by music, and influenced by a variety of greats from Frank Sinatra through to R&B icons such as Erykah Badu and Jhené Aiko, Jaydon instantly found herself recreating her favourite songs and uploading covers to YouTube. Over the years Jaydon has developed her sound, style and talents, and it was in 2017 when she really began to pursue her career as an artist, building a strong team around her including talented producers Hurricane and Paal Singh. Following a string of impressive releases including Redyellowgreen, Goodthing alongside KayFaraway and I Wish You, Jaydon has blossomed into one of the most exciting acts within the UK R&B scene. Now, with the critically acclaimed debut project Recovering Lover behind her, the rising star is preparing to raise the bar even higher. Jaydon has been working closely with talented producer dylantheinfamous on some exciting new music, and with her smooth, unique singing style, and the brutally honest and vulnerable approach to her writing, laid perfectly over Dylan’s impressive productions there is no doubt that the new music will be turning heads.