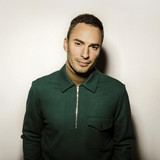 Dominating the Dutch club scene for over a decade, Haarlem native Gregor Salto has become a household name amongst dance music lovers all across the world. Having mastered his distinct and versatile sound over the years, Gregor emanates a truly global and exciting blend that fuses elements of soul, Latin-funk and African-grooves laid over a solid base of house and electro four-to-the-floor. Headlining some of the most revered festivals and clubs around, Gregor has spun at the likes of Tomorrowland, Ultra Music Festival, Global Gathering,

Mysteryland and countless performances in his homeland, the Netherlands. Grammy Award: The track ‘Echa Pa’lla’ with Pitbull lead to a Grammy award, and won him a coveted ASCAP (American Society of Composers, Authors & Publishers) Award. Collaborations and remixes: Gregor Salto worked with the biggest names in the world like Afrojack, Fatboy Slim, Sander van Doorn, Oliver Heldens, Chuckie, Wiwek and many more. Besides that he made remixes for stars like Major Lazer, Rita Ora, Ariana Grande, J-Lo, Mariah Carey and many others.