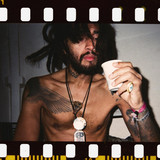 Colorful character escaped from an epic fresco, Gystere will unveil his debut album on November 20: A Little Story. In ten episodes, the exquisite musical chimera comes to life and resolutely overflows the usual boxes. Between science-fiction fantasy, modern psych-funk and pop, Gystere propels his DIY ship to 70s and 80s craftsmanship, a vector of anti-racist and anti-sexist messages hidden under the formidable effectiveness of his songwriting. With a powerful live band of six musicians (the Gystère Live Gang), he now brings together subtle groove, multi-layer writing and exaggerated psychedelia, under an afro-futuristic theme that refers to the voodoo jazz-funk of the 70s as much as to the anti-racist activism of our time.