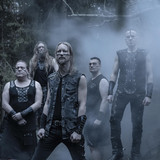 Ensiferum are a true powerhouse when it comes to folk-inspired melodic death metal, something they hammer home more resolutely than ever with eighth full-length Thalassic. The title translating from ancient Greek as "of or relating to seas", it's a suitably huge and wide-ranging collection that incorporates orchestrations and traditional folk instrumentation alongside the roaring guitars, bass, and drums. Kicking the album off with the grand orchestral piece "Seafarer's Dream" definitely makes an impression, though overall Thalassic scales back a little on such instrumentation. The likes of "Rum, Women, Victory" and "Run From The Crushing Tide" are certainly full on metal, but these sit comfortably alongside the jaunty "Midsummer Magic" and triumphant "Andromeda". The band were helped in realizing these tracks by the addition of new keyboard player/lead clean vocalist Pekka Montin who "really raised the new songs to another level" while Mikko P. Mustonen once again presided over the orchestrations and violin virtuoso Lassi Logren recorded folk instruments on a few tracks. Thalassic was recorded and produced in Petrax and Sonic Pump studios by Janne Joutsenniemi, who was involved on their albums Victory Songs (2007) and From Afar (2009). Gyula Havanchak handled the artwork and once again raised the Ensiferum standard, creating something that vividly reflects the songs, and indeed the theme running through them.