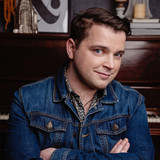 Jonathon Holmes is a songwriter and actor from Sydney, Australia. His musical comedy 'Three in the Bed', which he wrote and directed, has had two Sydney seasons since 2017. Reviewers hailed it "terrific fun: cheeky, sexy, laugh out loud... full of heart" and "a success". He also directed 'The Fantasticks' (Exclaim), and has played Berger in 'Hair' (Exclaim); Hewson/Downer in 'Keating!' (Birdie) and Tobias in 'Sweeney Todd' (AIM). He released his debut piano-pop EP 'Plutonese' in 2014; and two singles since then. Refusing to grow up, he is the host and pianist of 'Mickey's Jazz Club', swinging Disney songs. If you take a Carnival cruise, you may just find him playing at the piano bar. Currently he's working on his next musical: a horror-comedy. In real life, Jonathon speaks in first person. ​ “Jonathon Holmes is a clear audience favourite.” - Aussie Theatre "Unforgettable... no-holds barred..." - Sydney Arts Guide "Jonathon Holmes does it in style." - Stage Whispers "He was relentless in his energy and the crowd loved it." - Australian Stage