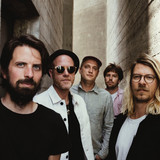 Timo Keller is not one to toss around big words - but he is a man of big musical references. As hardly any other Swiss artist he understands to channel his seemingly encyclopedic musical knowledge in such a way that his collected, previous work sounds like a genre-bursting potpourri. With his band Hanreti he has released 4 albums in the last 6 years, which sometimes focused on hip hop and soul, then indulged in funk or jazz influences or nonchalantly explored classic folk and indie rock. The latest release out of the band's own «Studio vom Dach» is a single called «Crusn», which musically ties in with Hanreti's most successful song to date, «Shine On». Repetitive bass lines and rumbling drums lay the rhythmic groundwork and gently push the song forward, while it melodically blossoms into a veritable summer hit thanks to the organ and guitar arrangements. According to Keller himself, the band hasn't radiated positivity so unabashedly in a long time, but it's a radiation that suits them extremely well.