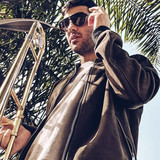 “It seems like a lifetime ago I got into music”, says the 27-year-old multi-instrumentalist. “I started playing the Piano at the age of seven and learned more and more instruments each year.” Until now, Halabi has mastered more instruments than one has fingers: guitar, violin, cello, trumpet and many others. He studied music composition and orchestral conducting at the Universities of Tel Aviv and Haifa and received a scholarship due to his outstanding talent. Six years ago, he became interested in music production. Since then he’s been spending most of his time working on songs, combining his hardskills with the technical side. He has mastered music production and is able to create exciting new sounds all by himself. Sam Halabi made his debut in the music industry in late 2015 with a remix by the soul queen herself: Aretha Franklin. Since then, artists like Robin Schulz and Anne-Marie have relied on his remix skills. In 2018 Halabi released his first own track "Fight For Your Love", which is about to hit 4 million streams. With his substantial background he takes music to the next level by combining classical and modern sounds. Inspired by Beethoven, Chopin, Mozart and Hayden, but also by Daft Punk, David Guetta and Calvin Harris, he mixes western and oriental influences, creating a diverse, rich and thus unique sound.