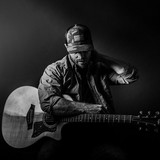 If you ask him, Houston is where he’s from. But his family didn't plant roots in Texas until he was in the 3rd grade. The saying that "I wasn't born in Texas but I got here as fast as I could" has never been truer than for this Naturalized Texan. Nate Burnham's love of country music and Texas Two-Stepping took hold young on annual trips to Garner State Park with his best friend, asking girls to dance under the famous Live Oak tree beside the Frio River to classics like "Smokey Mountain Memories" and "Texas Tornado" or anything from George Strait. The Texas/Red Dirt music scene soon caught fire with show stopping acts like Pat Green and Cross Canadian Ragweed and he discovered a new kind of music, relatable and raw, sung by the songwriters who emptied their souls into a song. It was real. He was hooked. Fast forward one album, a wife and four kids later.. His new album, "Nothing But Time" due out May 1st 2020, has 13 original songs just like his 2012 debut album "Crash Course". When asked what his listeners can expect from his new album he replied, "There's something in this new album for everyone. We had 8 years of songs to pick from and there's a great variety top to bottom. The whole recording process was smooth which is a big credit to my friend, Jody Bartula, who produced the album. The sound quality is next level and I'm excited to release this album. It's been too long and it's time. I'm ready."