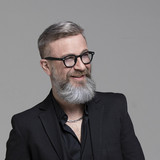 After getting his first piano at the age of six, Italian singer/songwriter Marco Masini began studying music, making his debut at the age of 11 while joining a local orchestra, later participating in a group called Errata Corrige. In the 1980s, the artist moved to Modena. While working as a DJ, Marco Masini was captivated by singing and songwriting. After playing piano for Humberto Tozzi, his composition "Disperato" became a winning song at the Sanremo Festival, recording a self-titled album soon after, followed by Malinconoia a year later. The album became a smash in Italy despite its somber music.

In early '93, he toured touring Europe for the first time, and, during break, recorded his true breakthrough T'innamorerai. Its lead track "Vaffanculo" (trans. "fuck off") was banned by radio, but the controversy