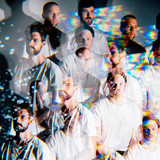 Düsseldorf/Cologne Band Marton Harvest has dedicated itself to the condensation electronic pop music. Marton Harvest is the project by Düsseldorf producer and songwriter Lennart Saathoff. Saathoff performs, writes and produces the music of Marton Harvest in his studio. On tour Marton Harvest consists of Paul Große-Schönepauck (Drums, Jonathan Kastl (Keys and Percussion), Julian Prießen (Guitar and Synthesizer) and Lennart Saathoff (Vocals and Synth). Marton Harvest celebrated their debut in October 2015 and were invited by the „Grandbrothers“ as support on their German tour soon after. Their first EP "Common Spaces" was released in April 2018 on the Düsseldorf label Futuregold Recordings. The follow-up "Monroe" is announced for July 2020. The first single "IYCM" will be released on June 26th, 2020.