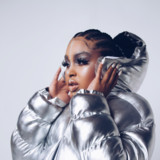 FIFA FLAME is a well-meshed hip-hop and R&B recording artist whose firey talent goes further than just her perfect pitched vocals on top of your favorite trap beat. Born in New Jersey, home of Jazz back in the 1900s, it was expected that she’d end up a star of her own. FIFA grew up in Gwinnett County, GA where she was taught to play violin and the viola in her early stages. FIFA loved music, but also enjoyed sports where she ended up playing in the R3 Premier Soccer League in Georgia and at Georgia State University before ultimately pursuing a career in music. It was easy for her to score the perfect stage name, as her talent in music and Soccer meshed into one, “FIFA FLAME” With the voice of an angel and a tomboy street style, She is a Fearless, athletic, Fireball of talent with the right balance of melodies and rap bars to keep you tuned in. On June 29th, 2020, FIFA released her first single “Bandito”, which has almost 300k+ plays across all music streaming platforms such as Apple Music, Spotify, and SoundCloud. FIFA is working on releasing her first project titled, “Flavor: VOLUME 1” this summer.