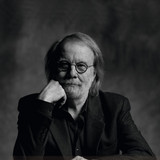 Producer/songwriter/keyboardist Benny Andersson co-produced the mega-hits of '70s Swedish pop group ABBA along with fellow ABBA member Björn Ulvaeus. Listening to ABBA, one can hear a definite Phil Spector/Brian Wilson/Beach Boys influence (the dense vocal harmonies) on their records, understandable since Andersson cites the group as a favorite. Benny Andersson was born on December 16, 1946 in Stockholm and comes from an accordion-playing family, which spawned his interest in picking up the instrument as a child. After discovering Elvis Presley, he began playing in rock bands. Choosing not to follow his father into the construction business, Andersson quit his custodial job to play piano with the Hep Stars. The group, which debuted with 1965's We and Are Cadillac, had 15 chart records in Sweden, including Andersson's song "Sunny Girl." After being exposed to the recording studio, Andersson's interest was piqued. Later he met songwriter/guitarist/producer Björn Ulvaeus and they began collaborating, releasing the 1970 album Lycka. The duo eventually decided to use their girlfriends, Anni-Frid Lyngstad and Agnetha Faltskog, on "People Need Love," which became a hit single. Buoyed by their success, they formed the group Bjorn & Benny, Agnetha and Anni-Frida or ABBA in 1974. The quartet performed "Waterloo" at the televised Eurovision Song Contest and won first prize. Because of the huge exposure, "Waterloo," an Atlantic Records single, became an international hit, going to number six on Billboard's pop charts in the summer of 1974. ABBA's other charting singles were "S.O.S.," "I Do, I Do, I Do, I Do, I Do," "Mamma Mia," "Fernando" (number one adult contemporary), the shimmering million-selling "Dancing Queen" (number one pop), "Knowing Me Knowing You," "Money, Money, Money," "The Name of the Game," the gold "Take a Chance on Me" (number three pop), and "Does Your Mother Know"; the group's last big hit was "The Winner Takes It All" (number eight pop, number one adult contemporary). Their biggest albums were the gold LP Arrival (early 1977), the platinum LP The Album ("Take a Chance on Me") from 1978, the gold Voulez-Vous (summer 1979), the gold Super Trouper (late 1980), and The Visitors (early 1982). After ABBA disbanded in 1982, Andersson continued his writing partnership with Ulvaeus. Together they collaborated with lyricist Tim Rice on the acclaimed hit Broadway musical Chess. Framed around the story of a Cold War-era chess match and love triangle between an American and a Russian master, the musical was a massive success, both critically and commercially. It spawned a hit album and several Tony Award nominations. The musical also featured singer Murray Head's version of the song "One Night in Bangkok," which reached number one in the U.K. and number three in the U.S. Andersson moved into producing, working with the duo Gemini, pop group Ainbusk, and with folk outfit Orsa Spelman. In 1987, he released his first proper solo album, Klinga Mina Klockor, which featured an eclectic folk-, classical-, and pop-influenced sound. A second solo folk effort, November 1989, followed two years later. He also worked with Ulvaeus again, supplying many of the songs for Josefin Nilsson's 1993 album Shapes. Two years later, he premiered his long-in-the-works second musical production, Kristina Fran Duvemala Moberg, an epic Swedish-language musical based on author Vilhelm Moberg's The Emigrants novels. During the '90s, Andersson and Ulvaeus helped develop the hit musical Mamma Mia!. Written by British playwright Catherine Johnson, and based on the songs of ABBA, Mamma Mia! opened in 1999 on London's West End and was an immediate success. The musical ran for over a decade in London and on Broadway, and helped reignite interest in ABBA. In 2008, Meryl Streep starred in a popular film version of the musical.

As a solo artist, Andersson stays busy, performing with his group Benny Andersson's Orkester (BAO). With the BAO, he has scored a several hits, and released a handful of albums including a 2001 self-titled effort, 2004's BAO!, 2007's BAO 3, and 2011's O Klang Och Jubeltid. He also supplied the score for the 2012 Swedish documentary film Palme. In 2013, he returned to his work with Ulvaeus, and the duo paired with writer Kristina Lugn for the musical theater production Hjalp Sokes. He then