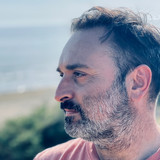 Luca Guerrieri is a DJ and producer from Tuscany. He lives and works in Follonica (GR), in his Double Vision Studio and his career began in 1995. His sound is really difficult to define, since it crosses all or almost all the different kinds of electronic music. For instance, in 2019 he releases his first album, "It Never Ends": among the 15 tracks (9 unreleased and 6 of the most representative of his career) there are also some downbeat pieces. The album comes out on Claps Records, a label that Luca runs with his friend Marco Roncetti. Among the many productions under his own name, should be mentioned at least "Tears" (it was played on the main stage of Tomorrowland too) and "Harmony", named by Pete Tong in his show on BBC Radio 1. The track for two consecutive weeks has been at the top of Dance Chart, Flow and was supported by top djs like Tiesto, Chuckie, Sam Feldt, EDX ... Over the years Luca Guerrieri remixed tracks by dozens of international artists including Bob Sinclar, Marshall Jefferson, Sidekick, Dirty Vegas, Watermat, Roland Clark, Ferreck Dawn, Rufus Du Sol, Ruffneck, Jutty Ranx, Crystal Waters, Jestofunk, CeCe Rogers, DHS, Darryl Pandy, Moony (...)