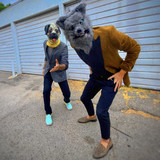 dirty Monster is an American alternative rock producer/band duo from Los Angeles, California, formed in 2015. The group released its first single "Good, Feel Good" in 2015,[1] followed by "Devil's Souls",[2] which was released with a corresponding blues-rock, southern version.[3] Their debut EP, RED[4] was released in 2018, referring it as Chapter 1 of 3, with a more upbeat feel. The group then released its sophomore EP, BLUE,[5] on March 1, 2019. The band was featured on Kaleena Zanders single, "Set Me Off" and "Stronger Than I've Ever Been" (featured in the 2018 SuperBowl and Winter Olympics), gaining popularity after being featured on Marvel's Cloak & Dagger and VH1's Black Ink Crew: New York, respectively. The band attracted widespread attention for their single "Coming for You", after being featured on Netflix's Locke & Key (TV series). Shortly thereafter, the band released the single's companion EP, BLACK[6] on February 19, 2020