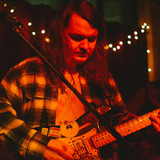 Dylan Rodrigue grew up in a small spiritual commune in the Sierra Foothills of Northern California, where he was barred from listening to most modern music. Despite the confines, Rodrigue’s father quietly slipped him illicit rock records, and life took a new shape. Dylan now lives in LA, writing and producing an endless flow of highly-eclectic and honest music. His upcoming alternative folk album, The Birds Are Still Singing, brings the sound of making peace with hard feelings, or at least trying to. With bare-minimum arrangements, timeless melodies, and a nearly-numb delivery, he shares vulnerable truths that most might feel afraid to own. His storytelling abilities and candor are reminiscent of Elliott Smith or Bob Dylan, while he finds inspiration from the likes of Tom Waits, Death Grips, Leonard Cohen, and Swans. Rodrigue released his 2019 debut album Cat's Game through UK label Bad Paintings. He toured throughout England along with Sie Sie Benhoff in support of the record and returned to LA to continue recording and performing. During pandemic isolation, Rodrigue released the Human Muses EP in June of 2020. Both initial releases are told from within the thick of struggle, while the new record thrives on retrospection. With producer Malachi DeLorenzo and an 8-track reel-to-reel, he brings his most refined and intimate work to date.