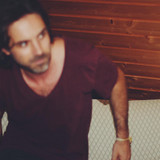 There are great talents, many part-time melancholic and even more likable loners next door. And there is Florian Ostertag. His nature: down-to-earth and authentic artist. His music: hand-picked and multifaceted. The overall package: an idiosyncratic, musical personality with honest rough edges and a good sense of self-irony. Constantly searching for the fulfillment of undefinable longings, for more than ten years now the vagabond has spent most of his life touring and playing solo or as band member with Philipp Poisel and Lena Meyer-Landrut. Also as a music producer, Florian Ostertag shaped the music landscape and also enriched German movie productions with specially composed film music (“About a Girl”, “Love Wall”, “Time of the Room Fires“). Whether on his debut album “The Constant Search“ in 2009, on his live EP “The Maria Sessions”, appearances on TV Noir or the SWR3 Late Show or at his concerts and as support act for Philipp Poisel, William Fitzsimmons, Alin Coen, Boy or Joris: Ostertag always touches the audience with wonderful melodies, creative, playful songs and his smorgasbord of partly antiquarian instruments. With a mixture of perfection, instrumental inventiveness and his roguish nonchalance, he expresses life through his music as he experiences it: intense, benevolent and with highs and lows. For his tenth anniversary, Florian Ostertag will officially release his long-awaited second album in February 2020 – with authentic, sensitive and captivating music.