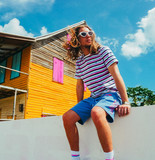 The Busy Twist is a UK based producer focused on rejoining the dots between Afro, Latin and UK Bass music by developing to sound which not only melds the sonic genealogy of all three palettes but also presents such crossovers faithfully. The debut EP 'Friday Night' with Soundway Records is preoccupied with the ever-decreasing gap between London and Ghanian music in an effort to capture the vibrancy and warmth shared by both cultures. Beyond the banks of West Africa to resonance with Colombian roots is increasingly present in his music - a link which has developed over a series of trips to the country in recent years, and furthered by productions alongside prolific artists such as Nidia Gongora and Ghetto Kumbe.