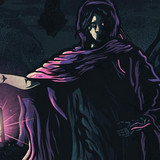 MORTTICIA, originally formed in the city of Alegrete/RS in 2010, aims to build songs with a sound rooted on the traditional Heavy Metal of the 80's infused with more modern and progressive trends. With influences such as Black Sabbath, Iron Maiden, Queensrÿche and Angra, the band creates songs with complex structures and story-focused lyrics, against a backdrop of heavy riffs and striking melodies. Within the traditional metal sphere, the group has been featured on the NWOTHM Full Albums channel, which specializes in bands of the genre. At the end of 2017 the band released their first demo, entitled "Existence / Resistance", containing three tracks: "Life is On (One Flower)", "Violence" and "Hear My Words". The lyrics address issues such as the origin of life seen through the eyes of the survivor of an apocalypse and the relationship of humanity with themes such as violence, authoritarianism and freedom. The songs were produced independently using open source software. In November 2019 the band debuted their new lineup, a concert celebrating the release of the single "Ocean of Change". After the excellent reception of “Ocean of Change”, the group decides to release another single, this time for “Hear My Words”, presenting a new recording of the track, originally present in the demo “Existence/Resistance”, of 2017. Both the tracks will be part of the EP “A Light in the Black”, which should be released soon.