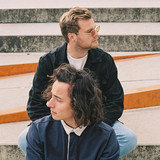 Makèz is no stranger to challenging the status quo of what house music can be. The duo is known for contemporarily remixing the ingredients of classic house into future proof compositions. The Amsterdam-based duo grabbed the attention of the Dutch club scene at a young age. After releasing their debut EP 'Different Planets' in 2019, they found their name quickly crossing borders, then spreading around the world.   Since, they've released on hometown label Heist Recordings as well as New York City's Let's Play House, and they've continued to see support from established artists such as Seth Troxler, Groove Armada, Chez Damier, and Dam Swindle.   The paths of these harmoniously contrasted individuals, Jan-Willem Mulder and Kees van 't Klooster, crossed in their early teens. From the moment they met on, they've enthusiastically explored the music industry in the broadest sense of the word, first with DJ and live sets, rife with self-made tracks and inventive edits, and, more recently, with increasingly ambitious, expansive studio projects.   Their debut album, a Heist production, is called ‘City of All’. Join the two for a vibrant voyage, fusing the sounds of places that shaped their musical vision. Borderless in a way this modern world often seems to be afraid of. As they say, love will save the day, and Makèz is here to dance with you along that joyful journey.