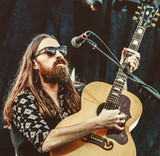 Describing Junior Mackenzie's music is not an easy task. It is a project that flows from the creation of a single entity to reach the entirety of a collective. It stems from a sonic architect who builds castles with bricks of folk, rock, blues or jazz, drinking from the waters of North American music. After earning great reviews from previous works and acoustic tours in the United States, "Files of Life" is another step forward and a reinvention for a musician that is difficult to classify stylistically. Junior Mackenzie has toured with The Kills and has supported great international artists such as Frank Black, Richard Hawley and Zucchero among many others. In this new LP, Junior Mackenzie has had the honor of coproducing with Dani Castelar, sound engineer known for his work with REM, Editors and Snow Patrol. And, as if that were not enough, Junior Mackenzie has signed with the US recruitment agency Atomic Music Group, sharing a roster with artists like The Bellells, Nashville Pussy, Scott H. Birman, Supersuckers and LukeWinslow-King. With a sumptuous instrumentation, which combines layers of rich melodic chords with keyboards and guitars, and a profound cinematic air, these new compositions take Junior Mackenzie to more open and evocative spaces, without sacrificing the profound delivery of the words. Junior Mackenzie has definitely found his voice and his sound in Files of Life; full of maturity, meaningful words, and and rich, musical nuances.