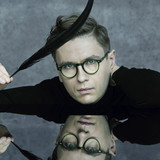 Pianist Víkingur Ólafsson’s remarkable originality and powerful musical conviction have seen him, in just a few years, take the music world by storm to become one of the most sought-after artists of today. He made an unforgettable impact with the release of his three albums, Philip Glass Piano Works (2017), Johann Sebastian Bach (2018) and Debussy Rameau (2020) on Deutsche Grammophon, for whom he is an exclusive recording artist. Debussy Rameau has already surpassed 21 million streams, bringing Ólafsson’s total streams to over 125 million and leading the Daily Telegraph to call him “The new superstar of classical piano.” Ólafsson’s multiple awards include the Opus Klassik Solo Recording Instrumental (piano) for two consecutive years (2019, 2020)​, Album of the Year at the BBC Music Magazine Awards 2019 and Gramophone magazine’s 2019 Artist of the Year. The New York Times meanwhile dubbed him “Iceland’s Glenn Gould.”