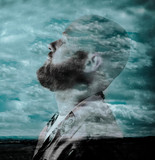 “One of Ireland’s most engaging – and surprising – artists.” Hotpress magazine 2019 Irish musician Deaf Joe makes cathartic, atmospheric, soulful tracks that push emotion to the fore. Each of his releases explore new soundworlds, ripping up what came before and starting from scratch. The folk etchings of 'Burrowings' came first in 2012, followed by the soundscape drifts of 2014’s 'From The Heights Of A Dream'. 'Joanna', his most beloved song to date, dovetailed between these two releases and soundworlds, and featured on MTV's Teen Wolf. Both were released on Dublin’s Delphi Label.   2018 saw the release of third album 'Stuck' on February 14th. Ireland's Hotpress magazine described 'Stuck' as "arresting" and "absorbing". March 29th brought 'And He Opened His Eyes And Looked Skyward', a composition dedicated to his grandfather's memory. Irish blog Nialler9 labelled it "a stunning piece of art music". It's a euphoric piece, looking to crush the loss of someone close and find some peace in seeing them off to the other side. It will feature in Glasgow’s 2019 Radiophrenia festival. 2019 brings more music... Wednesday March 27th sees the release of Joe's fourth album 'Love Stories'. This is primarily an instrumental set, a collection of ambient tracks developed for an appearance at Ireland's 'Another Love Story' festival in 2018. The music is warm, welcoming and for him recalls special places he's been with people he has loved, past and present. He hopes you enjoy listening.