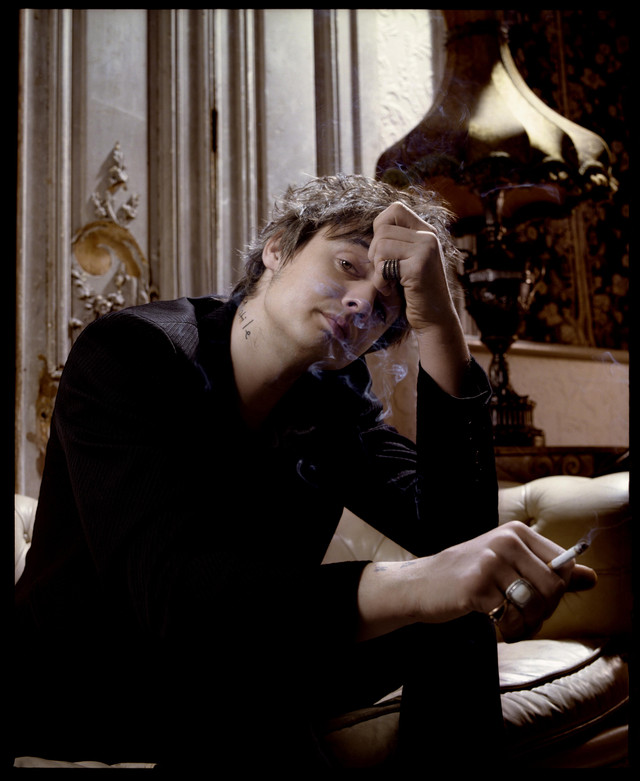 As a solo artist and member of bands including the Libertines, Babyshambles, and the Puta Madres, Peter Doherty combines a rebellious spirit, poetic lyrics, and a reverence for Albion, his idyllic vision of ancient England. In the early 2000s, the Libertines were one of the leading lights of the British rock scene. On albums such as 2002's Up the Bracket, they paid homage to generations of legends before them -- and in turn, inspired many up-and-coming artists. With Babyshambles, Doherty explored the more introspective and eclectic side of his music, folding reggae and cabaret into the band's shaggy indie rock on releases like 2007's Shotter's Nation. On his own, he incorporated all the aspects of his other projects into appealingly loose and rollicking efforts that included 2016's Hamburg Demonstrations. Born into a military family, Doherty passed much of his youth moving from place to place, both in England and Europe. An intelligent child and a good student, he immersed himself in books, especially Romantic and war poetry. He began playing guitar at age 11 and won a poetry writing contest at age 16. After finishing his A-levels, Doherty moved into his grandmother's flat in London and spent some time working as a gravedigger in Willesden Cemetery. He studied English literature at the University of London but dropped out after a year; he then moved into the apartment of guitarist and singer Carl Barât, a friend who had studied with Doherty's sister at Brunel University. The pair began writing songs together, employing a variety of different characters (including a 70-year-old) to complete their band, which they called the Libertines. They settled on a lineup -- Doherty and Barât on vocals and guitars, John Hassall on bass, and Gary Powell on drums -- and signed to Rough Trade in December 2001. The band released their debut single "What a Waster" in June 2002 and quickly followed it with their critically acclaimed full-length debut Up the Bracket. Despite the Libertines' success, Doherty's drug habit (he later admitted addictions to both crack and heroin) caused him to miss many of the group's shows. In 2003, he spent a month in jail after breaking into Barât's apartment. Once Doherty was released, the two made up, immediately playing a show together and planning for the Libertines' future. Doherty then entered a rehabilitation clinic in rural Thailand, where he stayed three days before leaving for Bangkok and eventually making his way back to England. Around this time, Doherty began playing solo gigs and formed Babyshambles with guitarist Patrick Walden, bassist Drew McConnell, and drummer Gemma Clarke. The Libertines issued their self-titled sophomore record in August 2004, but despite the critical praise it received, the band was essentially defunct. Doherty also pursued other projects. He teamed up with the poet Wolfman on the single "For Lovers," which entered the U.K. Singles Chart at number seven that April and was nominated for an Ivor Novello Award for songwriting. That year, he also contributed guest vocals to Client's album City. In October 2005, Babyshambles released their debut album Down in Albion. The following year, they signed to Parlophone Records, which issued the Blinding EP that December. In June 2007, Orion Books published The Books of Albion: The Collected Writings of Peter Doherty, which included drawings and photos along with his poetry. Around this time, he also showed his paintings at London's Bankrobber Gallery. After the release of Babyshambles' sophomore album Shotter's Nation in October, the band went on hiatus. Doherty then recorded his solo debut with producer Stephen Street and Blur guitarist Graham Coxon. Grace/Wastelands, which was billed to Peter Doherty, was released early in 2009, shortly after his 30th birthday. In the 2010s, Doherty continued to juggle multiple projects. Building on a 2007 show with Barât, in 2010 the Libertines reunited for a series of well-received shows that included gigs at that year's Reading and Leeds festivals. He also appeared in Confession of a Child of the Century, a 2012 film adaptation of Alfred de Musset's autobiographical novel La Confession d'un Enfant du Siècle directed by Sylvie Verheyde and co-starring Charlotte Gainsbourg. In early 2013, Doherty and Babyshambles returned to the studio with Stephen Street to record their third album, Sequel to the Prequel, which arrived that September. Meanwhile, the Libertines reunited again in 2014, playing sold-out shows at London's Hyde Park and Alexandra Palace, and eventually recording another album, 2015's Anthems for Doomed Youth. Doherty's second solo effort, Hamburg Demonstrations, was recorded at the city's Cloud Hills Recordings and released in 2016. While the Libertines were on hiatus, Doherty assembled another new project, Peter Doherty and the Puta Madres. Formed by members of his 2016 touring band, the group included keyboardist Katia De Vidas, guitarist Jack Jones, violinist Miki Beavis, bassist Drew McConnell, and drummer Rafa. In 2017, McConnell left the group to join Liam Gallagher's touring band; in his place, the band brought on French musician Miggles. To make their debut album, they spent a week in a French fishing village, working with producer Dan Cox and Jai Stanley. Peter Doherty & the Puta Madres arrived in April 2019. ~ Heather Phares & Marisa Brown, Rovi