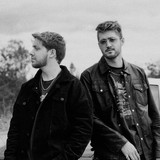 As some of you may know we’re from Toronto but grew up in different small towns just outside the city. True to our generation, we found each other on Youtube and connected through a Facebook DM and somehow managed to make a song through email called “Tragedy”. The success of that song lead to the creation of Always Never.   Since then we’ve released two full albums and two EPs.   It’s been a hell of a journey. Whether you’ve been with us since day one or just discovering us now, we have so much in store for you.