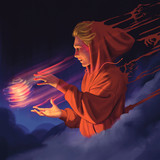 Formed in early 2020, West of House was barely a creative spark before the entire world was locked down. Rather than put the project on hold, the indie alternative rock quintet used that time to their advantage and in

just nine months wrote, recorded, and released their debut album, Crescendo of Silence. Critics hailed the genre hopping album saying it was “full of songs which fuse past sounds with more modern sonic visions, where rock weight is tempered by cooler indie control,” and "the true center of the album, its heart and soul, comes from the fire and passion of the lyricism." This foundation and the strength of the album’s singles "Fallen," "Yesterdays," and "Moving Shadows" brought in over 100,000 streams on digital outlets before the end of 2020. Still unable to play live, early 2021 brought the release of The Pinecone EP, a five-song collection of B-Sides as well as a gender bending cover of "Heaven / Hell" by CHVRCHES. But the band didn’t stop there... On September 3rd, 2021 West of House surprise dropped the album Drown the Wind. It picks up right where Crescendo left off and raises the stakes across the board. Musically anthemic and lyrically scathing, Drown the Wind claims its place in the zeitgeist by delving deep into issues of nationalism, prejudice, and the illusion of control. The first single from the album is “Entwined,” a prog-inspired, time signature jumping hymn of praise celebrating love that transcends gender, race, and ethnicity.