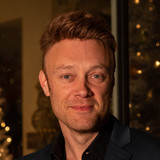 Aaron Stewart is probably best known as the Co-Founder of Planning Center, a company that makes software for churches, but leadership in a software company was not the path he envisioned. At 4 years old as a missionary kid in Colombia, he started taking piano lessons. When his family moved back to the US, piano remained a big focus, in addition to singing and songwriting. Then with a BA in music composition from APU, he became the Music Director at Central Church in Las Vegas and Southwest Church in Palm Desert, where Planning Center was started. After leaving full-time music ministry to help lead Planning Center in 2011, his main creative outlet shifted from writing and performing music, to designing software. Over the years, in addition to volunteering on his church worship team, he is brought in as a guest worship leader or soloist at various churches. In 2021, he released a Christmas album, the Wonder of Christmas, featuring 9 of his arrangements of Christmas classics, plus 3 original songs. Recorded with a full orchestra in Nashville, its diverse genres include Big Band, Pop, Classical, Jazz, and even some Salsa.