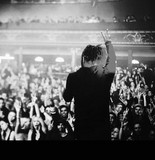 Sweetie Irie began working on local sound systems as a teenager, bringing him to the attention of Aswad’s Angus Gaye, who recruited him to MC on the dancehall mix of their single On And On. He signed to Island Records and in 1991 released his debut album DJ Of The Future which went gold. Sweetie dominated the 90s reggae & dancehall scene. No stranger to the national charts, he scored a top 30 hit with Aswad’s Smile and a top 40 with Scritti Politti’s Take Me In Your Arms. In 2001 Sweetie joined up with UK garage outfit Middlerow and went on to collaborate on the Gorillaz hit single Clint Eastwood which went to number 2 in the charts and achieved platinum status. He followed that with another top 30 single, Who, produced by Ed Case. In 2016 Sweetie teamed up with Kideko, George Kwali & Nadia Rose for the Ministry Of Sound single Crank It which was championed by BBC Radio 1’s Annie Mac, went on to be a top 20 hit and received a placement in Lucozade’s ad campaigns. Sweetie’s live show is legendary – with his distinctive trademark husky vocals and high energy, he never fails to light up the place. Touring the world extensively for the last 3 decades, he has performed at major festivals such as Glastonbury, Wireless, Lovebox & Boomtown. A highly accomplished songwriter, Sweetie’s writing credits include cuts for No Doubt, Ian Brown, Sly & Robbie, Bobby Digital, Maxi Priest, Shy FX, Congo Natty, Roni Size, Redlight, Zinc, Toddla T, Riton, Mr Easy & Ms Dynamite, to name a few.