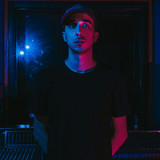 The artistic journey of Mattia Paladini a.k.a Neblo began when he was a kid when he started learning and playing guitar. Influenced by rock, pop, urban and electronic music, Mattia began to produce the first tracks, combining technical qualities and artistic inspirations. In 2014, he participates to a "remix contest" promoted online by Jennifer Lopez for his song with Iggy Azalea 'Booty' and the remix reaches the eighth position worldwide, with the chart being drawn up by themselves. Neblo starts playing on the consoles of the most important local clubs. The Artist reaches a mature sound and noteworthy achievements last August 12th, 2016, when he performed on the Main Stage of the Parco Gondar in Gallipoli (Lecce, Italy) taking part of the "Listen Tour 2016" as official supporter of the world star David Guetta. It is on that stage that Neblo presents live his official remix track of the world hit Billie Eilish 'Ocean Eyes' published exclusively on YouTube on October 5, 2016. In the summer of 2017, during a "freestyle battle" in a street of his neighborhood in Surbo (Lecce, Italy) Neblo noticed two rappers Worst and Enemy with whom he established a strong bond right away. Between the end of 2017 and 2018, Neblo produces and records tracks with the two rappers, and his first Album EP with italian artists which release date is t.b.a. Neblo is constantly working in the studio for the production of unreleased tracks, inspired by sounds of Trap, Hip Hop, Pop, Dance, Electro, EDM.