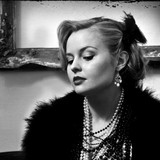 An Electro Swing project with old jazz sounds and a positive vibe. Members: Per Ebdrup and Karina Kappel. The debut album "Electro Swing Republic" was released 7th Feb 2011 by Freshly Squeezed. The album second "Midnight calling" was released 5th November 2012. The tracks on this album are original compositions written and performed by Swing Republic and additional musicians. Produced and mixed by Per Ebdrup. Co-produced and Co-mixed by Jakob Sejer-Nielsen. The third album "Let's Misbehave" follows the vibe from the first album, with old samples combined with electronic elements. Swing Republic combines the spirituality and emotional expressions from the past with the electronic technology of the future. Open-mindedness of the hippie culture and hypnotic rhythms of industry. A globalized and worldly mindset. "Emotional Technology" is one of the leading principles in the approach to the musical landscapes and cities of Swing Republic.