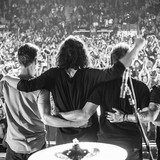 Temple Of The Dog

Featuring Temple Of The Dog

Temple of the Dog was a one-album project conceived in 1990. The purpose of Temple of the Dog was to pay tribute to the late Andrew Wood, the lead singer of Mother Love Bone, who died of a heroin overdose in 1990. Following his death, Mother Love Bone broke up, but Wood's bandmates Jeff Ament (bass) and Stone Gossard (guitar) decided to continue working together. Before Ament and Gossard formed a new band, they assembled Temple of the Dog, recruiting Chris Cornell (vocals) and Matt Cameron (drums) from Soundgarden to form the core of the group. Temple of the Dog also featured contributions from then-unknown vocalist Eddie Vedder and guitarist Mike McCready. Temple of the Dog recorded their eponymous album in 1990, releasing it at the end of the year on A&M Records. The album received positive reviews upon its release, but didn't chart until the summer of 1992, when Pearl Jam -- a band Ament, Gossard, Vedder, McCready, and drummer Dave Krusen formed in late 1990 after the completion of the Temple of the Dog album -- had a Top Ten album with their debut record, Ten. Following the success of Ten, A&M re-released "Hunger Strike" -- a duet between Vedder and Cornell -- as a video and single, and the album quickly scaled the charts, reaching the Top Ten and going platinum before the end of 1992. Over the next two decades, Temple of the Dog remained a one-off, although Chris Cornell occasionally joined Pearl Jam on-stage to perform "Hunger Strike." When the Temple of the Dog album reached its 25th anniversary in 2016, the band reissued it in a double-disc deluxe edition and embarked on their first-ever tour. ~ Stephen Thomas Erlewine, Rovi