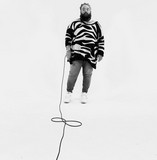 As an openly queer rapper, Texas' Chris Conde combines the classically detached spheres of hip-hop, hardcore punk, indie rock and avant-garde experimental noise. In their unabashedly vunerable and poignant bars, Conde strives to relate to their audience through an honest communication of their personal narrative of overcoming drug addiction, internalized homophobia and self-acceptance.   The rapper’s new album Engulfed in the Marvelous Decay was just released on Fake Four Inc on April 4th and is

a broad spectrum of moods and sounds; from the soaring and redemptive “Mariposa” to the blistering metal aesthetic of “American Faggot” and “Cancel Culture Blues”, the pure radiant chill hop joy of “Okinawa” and the hypnotic, banjo-tinged atmospheric soulful experimentalism of “Leaves,” the record manages to stay cohesive despite tiptoeing through many music territories.   The production team includes KDEATH of Moodie Black, Whatever Cecil and Lazerbeak (Lizzo, Doomtree), the latter of which helped to birth the undeniable hit that is “Mariposa''. It’s all rounded out with cameos by Ceschi Ramos, Rodleen Getsic (best known for her vocals on “Knife Prty'' by Deftones), Sammus and others. The ambitious Engulfed is a fiercely honest story of the challenges of navigating an often unjust world while battling addiction and the triumph of the feeling that comes from graduating to a place of self-acceptance and pride.