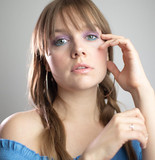 Forward-thinking Danish electro/R&B artist Fjer is the moniker of Maja Barløse. As a rare triple-threat singer/songwriter/producer, she wields a command of high-caliber songwriting and has a distinctive voice that is both airy and soulful.   Fjer has released two EP’s and her debut album on independent New York label, Quintic and has been featured on a great variety of international releases by Built To Fade, Tonedeff, Lucy Camp, The Off Daze, Negash Ali, Erik, Substantial, metsä etc. Fjer is also an experienced producer and has produced and co-written for artists like Ara Noir, Emilia James, Zoë Wick & Ronja. She just signed a publishing deal at big Copenhagen based publishing house, The Arrangement - as the first female producer ever to sign there.   Now it’s her turn to shine with the release of her new single “Sleeping With The Enemy". Written, performed and produced by the Copenhagen based artist. It comes after her last four independent releases “Call It Off” (2020), "First Place" (2020), “Solo” (2020) & “On My Own” (2019). They all landed on big Spotify playlists like New Music Friday, FRESH FINDS: Pop, De Nye & Hej Søster. They also achieved airplay on Danish national radio P3 & secured her a spot at Denmark’s most influential (and unfortunately cancelled due to COVID-19) musical event SPOT Festival. Fjer is an empowering female force to be reckoned with - one you should get acquainted with in 2021. Fjer is supported by Koda Kultur. Fjer er støttet af Koda Kultur.