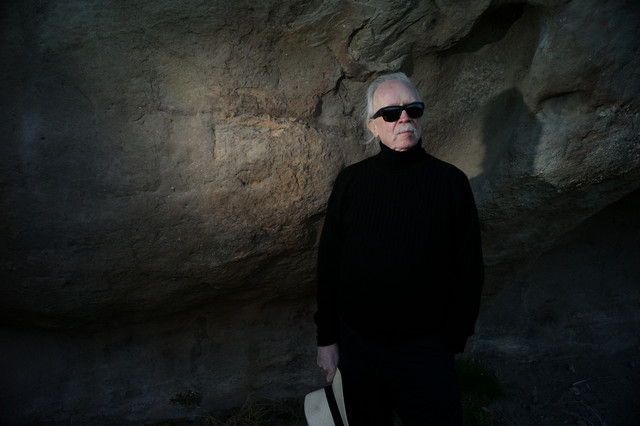 As the years passed, sci-fi/horror director John Carpenter earned nearly as much acclaim for his music as for his filmmaking. The son of a music professor at Western Kentucky University, he crafted a distinctive sound dominated by pulsing, arpeggiated synthesizers and atmospheric washes that echoed his stark visual style. From his beginnings as a film student in the early '70s, Carpenter scored all but four of his films (The Thing, Starman, Memoirs of an Invisible Man, and The Ward) as well as the television horror trilogy Body Bags. During the 2000s and 2010s, artists such as Umberto, Zombi, Majeure, and Portishead's Geoff Barrow drew inspiration from the director's music for their own projects. After The Ward, Carpenter began making music with his son Cody (who makes his own music as Ludrium) and godson Daniel Davies. Incorporating elements of Carpenter's electronic-based scores like Halloween and Assault on Precinct 13 as well as later, more guitar-driven ones like Vampires and Ghosts of Mars, the trio's improvisation-based songs became Lost Themes, which Sacred Bones released in February 2015. Just over a year later, Lost Themes II, which found the trio recording together instead of collaborating long distance, arrived. Following Carpenter's first-ever concert tours, he re-recorded a selection of his most well-known themes. Sacred Bones issued Anthology: Movie Themes 1974-1998 in October of 2017. The following year, Carpenter returned to the Halloween franchise for the first time since he directed the original's sequel in 1982. He composed the official score for a new installment in the series that featured an updated version of the film's classic theme. The soundtrack was released alongside the film's arrival in October of that year. The trio of Carpenter, Cody, and Davies reconvened for 2021's Lost Themes III: Alive After Death. ~ Heather Phares, Rovi