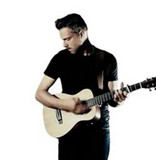 Viennese singer-songwriter Ben Leven captivates with musical diversity and touching lyrics. His songs are often thoughtful but always look ahead, creating a positive mood. The catchy choruses invite you to sing along. The artist’s debut album "What Lies Behind", released in 2018, underlines his multi-faceted nature. Charismatic pop songs meet driving beats, atmospheric guitars meet wide choirs – all hand-made and real. The album is a manifestation of Ben Leven’s enormous repertoire. His tracks resemble a Saturday morning brunch with Peter Gabriel, U2 and Sting while Ed Sheeran and Mark Knopfler swap guitars. Both with the arrangements of his songs and with his powerful stage presence he delivers impressive performances, not least due to his characteristic voice, with which he creates unique loops, or his energetic guitar playing, accompanied by the finest rhythms. This way, Ben Leven transforms every gig into a grandiose one-man-show. Born and raised in Vienna, Ben Leven started to play the drums when he was 9 years old. At the age of 14, he reached for his mother’s concert guitar and, through it, explored the musical worlds of artists such as Mark Knopfler, Sting, Pink Floyd, Peter Gabriel, Phil Collins, Queen and U2. Soon, Ben began to write and record his own songs. Right from the start, he played in various formations and was therefore able to collect plenty of stage experience as drummer, guitarist and singer throughout the years.