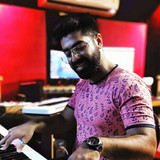 ​Sir Gamma is an Indian artist based in the capital city. With exemplary music taste and it's sterling sense, he focuses in creating music of all kind from EDMs to soulful tunes for your late night walks. His varied choices have bloomed because of exposure to Hip Hop, Western Rap , Bollywood music along with early training in Indian Shastriya (Classical) music . He has been inspired by the works of Martin Garrix , Jacku, Diplo, Jonas Aden and soon some insanely talented Indian artists like Lost Stories, Nucleya, Ritviz and Prateek Kuhad exposed him to the Indie Music industry. Sir Gamma released his new single 'Rihla' featuring Jazzz Jyotsna on August 13, 2021 which is captivating listeners on both local and national level. Rihla has got a lot of support from listeners and various music enthusiasts. It has also been featured in Dailyhunt News, Google News, Suffle Music Magazine , Entrepreneur Stories, Savaal Magzine and in a lot of other recognized publications. It’s a must listen, we hope you will love it. Click Rihla to stream. He always try to give his musical pieces a personal touch hence keeping them authentic.  Fortuitously he is going to release some more originals in 2021. Here are a couple of playlists with Sir Gamma's personal picks 1. The Current Mood 2. Love Locked - Sir Gamma Selects Lots of love from Sir Gamma to all the people who reached till here reading the bio. You also might wanna give him a visit on Instagram @sirgammamusic