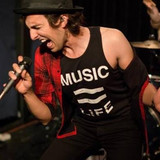 Famous for a Century

Featuring Famous for a Century

Burned-out from the inter-band drama of their previous projects drummer Dave Whitcomb and guitarist Peter Fraedrich had decided to focus on their daytime careers long before they even met. But after playing on stage together at a few events, both rediscovered the passion that had started their music careers. The two began writing and recording in Dave’s basement whenever they could but it became clear that a third person was needed: someone who could not only sing well, but could blow the doors of a venue single-handedly. After bringing in Aly Miraminy the band faced a serious problem: none of the material that had been written up to that point was designed for a vocalist of his range and tonality. So the band threw everything out from the ground up wrote and recorded their debut album, Collapse, released in February of 2013. Self-written, self-engineered, and self-produced, Collapse provided a blueprint for how the band would go about their studio work. The next six months were spent perfecting their live show for the group’s first public appearance at a sold-out club Vienna, Virginia, in August of 2013. December of that year would prove that lightning can strike twice, with the band playing a packed-out Christmas show at the same venue, which included original arrangements of some Christmas classics. The band released their follow up EP, Say What You Mean, in 2014, followed by a slate of singles over the next few years.