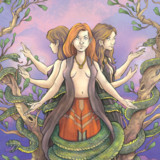 With his debut album and it's predecessor both releasing shortly after one another, he already has a third album that is set to release before 2021 is over. Samtar grew up on the likes of System Of A Down, Mastodon, Nirvana, Jimi Hendrix, Sublime, and Muse; now he unites these divergent influences with writhing bass lines, hook-heavy guitars and keys, and a strong dose of Mike Patton-inspired vocals.