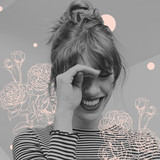 When you start out retro, you don’t expect to become an original, but that is exactly the position that British singer-songwriter Stephanie O finds herself in. Originally hailing from London, Stephanie came to the music scene in her teens as founding member of vintage swing-pop harmony group The Puppini Sisters; before leaving several years later; intrigued by a world outside her dressing room and with a drive to strike out on her own. Having worked with and performed alongside artists such as Michael Bublé, Carole King and Cindy Lauper; her eclectic influences and experiences percolate her music. Stephanie O is a mesmerising artist that loves to take her audience on a journey with her. Her sound is a beguiling blend of pop-jazz that is driven by her powerfully expressive voice and lyrics. Stephanie pursued a dream of moving to Paris late last year, delighting in a new musical playground to inspire, create and collaborate and the results flourish in her new work. Having spent the last few months hopping between studios in Paris and London to record with producer Peter Lyons; her music carries a fresh new sound and infectious energy. Her new single ‘Woman Oh’ is out now.