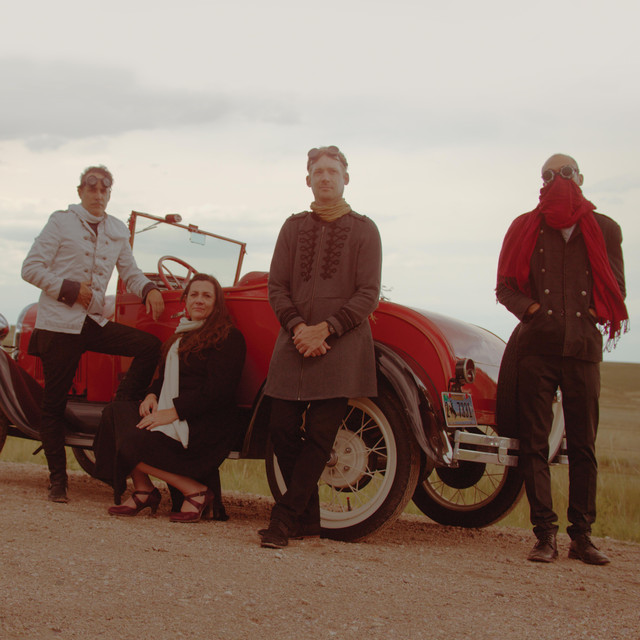 A cross-pollination of numerous influences, including cabaret, spaghetti Westerns, norteño, punk, and the immigrant dance music of Eastern Europe, Colorado-based quartet DeVotchKa emerged as unlikely indie heroes in the mid-2000s. Along with bands like Calexico and Gogol Bordello, they infused modern indie music with a global flavor, eventually finding widespread success in 2006 with their Grammy-nominated soundtrack to the hit indie film Little Miss Sunshine. Signing with Anti- in 2008, they released their landmark fourth album, A Mad & Faithful Telling. Following the world tour in support of 2011's cinematic 100 Lovers album, DeVotchKa entered a hiatus, regrouping for 2018's This Night Falls Forever. DeVotchKa was formed in Denver by multi-instrumentalists Nick Urata (vocals, guitar, trumpet), Tom Hagerman (violin, accordion), Jeanie Schroder (sousaphone, bass), and percussionist Shawn King. Originally a backing back for local burlesque shows, they recorded their debut album, Supermelodrama, in 2000, garnering numerous accolades and touring with such luminaries as Calexico, 16 Horsepower, Flogging Molly, and Archer Prewitt. Una Volta followed in May 2003. Issued by the Boulder, Colorado indie Cicero, DeVotchKa promoted the album through a tour with noted burlesque/fetish entertainer Dita Von Teese. With the release of their third album, 2004's How It Ends, the band found a wider audience thanks to its title cut being used in, among other places, a major campaign for the video game Gears of War 2, and a trailer for the move Everything Is Illuminated. It was followed in 2006 by Curse Your Little Heart, an EP of covers that included Siouxsie and the Banshees' "Last Beat of My Heart" and the Velvet Underground's "Venus in Furs." That same year, they composed the lush score for the independent film Little Miss Sunshine, earning a Grammy nomination for Best Soundtrack, bringing DeVotchKa mainstream exposure. Signing with revered indie, Anti-, the band delivered A Mad and Faithful Telling in early 2008, reaching the number nine slot on the Billboard Heatseekers chart. A lengthy world tour followed, including stops at major festivals like Bonnaroo, Lollapalooza, and Bumbershoot. After doing more soundtrack work, this time for the 2009 comedy I Love You Phillip Morris, the group returned to the studio for 2011's moody and triumphant 100 Lovers. Embarking on another world tour, they collaborated with the Colorado Symphony on the 2012 concert album Live with the Colorado Symphony. Over the next several years, Urata became increasingly involved in his own film composition career, scoring movies like Crazy Stupid Love, Whiskey Tango Foxtrot, Paddington, and the Netflix series A Series of Unfortunate Events. Meanwhile, the band regrouped for a lengthy recording session, eventually returning in 2018 with their sixth album, This Night Falls Forever, this time via Concord Records. ~ Johnny Loftus, Rovi