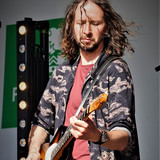 Independent blues rock guitarist and singer-songwriter Adam Sweet has marked his evolution into a fully-fledged blues-rock artist with his latest album release Sink or Swim. With brooding ballads and rollicking rootsy rock he delivers honest tales of loss, longing, hope and strength in the face of adversity. Taking his cue from the British blues boom sounds of Free and early Fleetwood Mac, married to the driving guitar style of Rory Gallagher and the sweet sounds of Little Feat and the Allman Brothers, Adam has spent the last decade carving out his own territory between classic rock, blues and Americana. Working in various guises: solo acoustic, session player and with his own band he has developed the consummate ability to switch from sensitive singer-songwriter to full-on blues rocker with ease, as demonstrated in his countless live performances and his output as a recording artist. His debut album ‘Small Town Thinking’ was praised by Guitar Techniques Magazine for offering a “whole new perspective on the blues”. The stripped back acoustic EP

that followed, ‘Take Your Time’, perfectly captured the essence of his acclaimed one-man shows. ‘Sink or Swim’ sees Adam return to his blues-rock roots with a timeless showcase of Adam’s expressive vocals and expertly piercing guitar work, cementing his unique blend of blue-eyed blues and soulful southern rock.