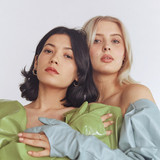 Lennixx is a duo from Sweden, consisting of Hanna Larsson and Andrea Kallström. On Sep. 21st, 2018 they released their debut EP hapap heavily influenced by contemporary R&B and neo soul, demonstrating the girls musicality as well as their aptitude for songwriting. In the last year, lennixx have signed to London-based management team Verdigris, which has further deepened their connection to the UK capital.  The duo’s time spent writing and recording in a city home to scores of r&b goliaths allowed them to digest the nuances of the genre left behind by the late-greats. Though inspired by the British scene, lennixx have succeeded in transplanting their own minimalistic sheen to the genre, and have coined something contemporary in the process.