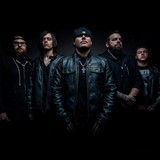 Hard. Heavy. Impossible to ignore.   BrokenRail are an award-winning rock and metal act currently making their mark on the global music scene. Their fresh fusion of hard rock energy to infectious metal rhythms has seen them amass a following in the tens of thousands worldwide. This exposure saw the fierce five piece featured on many major media outlets including ESPN, NBC Sports, MMA’s World Series of Fighting, and more. Their 2018 album ’Til Death Do Us Part’ won top honors at the 2019 Independent Music Awards in New York for “Album of The Year”, not to mention receiving streams in the tens of millions globally. The band has also acquired nominations in 2016-2020 for the Alabama Music Awards “Rock Band of the Year”, 2018 IMAs for "Song of the Year”, as well as 2018 Hollywood Music in Media Awards (HMMAs) for Rock "Song of the Year".   In late 2019, BrokenRail signed a worldwide record deal with Cleopatra Records out of Los Angeles, CA. The band then returned to LA January 2020 to meet back up with longtime producer Joseph McQueen (As I Lay Dying, Bad Wolves, Upon A Burning Body) to record their first full length under the label and 3rd studio album. The new album titled “Beautiful Chaos” officially released on November 13, 2020 and is available now!