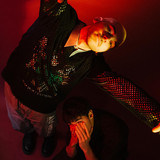 New single 'Move into Me (feat. Broods)' is out now! Bad Sounds, brothers Ewan and Callum started on different musical paths before the band was born, Ewan was keen on making hip-hop beats and playing with samples, Callum was more engrossed in the soul, pop and R’n’B of Michael Jackson, Marvin Gaye and Curtis Mayfield.   They started making music separately but it was only after spending time apart and coming back together to combine their musical tastes that they got serious about playing in a band together (adding band members Olivia- drums, Sam- bass and Charlie- guitar). The combination of Ewan and Callum’s differing styles coming together create the colourful and unique world that is Bad Sounds. Bad Sounds also write and produce under the same name, notably Arlo Parks track 'Bluish' on her critically acclaimed debut, amongst others.