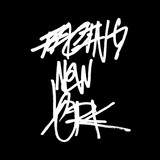 True friendship not only weathers, but also withstands the tides of change, trends, and time. No matter how fast life moves, it stays constant and consistent. The members of Facing New York— Eric Frederic [vocals, guitar] (also known as the multi-platinum GRAMMY–nominated producer/songwriter/artist Ricky Reed), Brandon Canchola [bass], and Omar Cuellar [drums]—maintain such a friendship. In fact, this bond underscores the essence of the Bay Area band, enabling them to always pick up where they left off. Formed in 2004, the group quietly emerged as a cult favorite in the Northern California scene as they delivered a handful of progressively charged alternative rock releases: Swimming Not Treading [2004], Facing New York [2005], and Get Hot [2008]. They even built an international following by touring throughout North America, Europe, and Japan. “Facing New York is always happening in the background,” explains Brandon. “It’s something we regularly think about, no matter where we are. Since we’re family, there’s no pressure. The music is really a construct through which we can express our love for each other as friends with no expectations ever.”