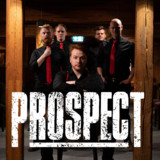 PROSPECT believes in the power of pure Rock ‘N’ Roll, and has the intent of making music that hits you hard and makes you want to bang your head and sing along. With influences such as AC/DC, Airbourne, Guns N’ Roses and Mötley Crüe, PROSPECT aims to take their fans back to the golden age of rock. Energetic live shows are a staple of Rock ‘N’ Roll. PROSPECT honors this, and strives to deliver an experience the audience will never forget. High intensity and high energy are to be expected at a PROSPECT live show. The band had its start in 2017 in Verdal, Norway. On March 8th, 2019 they self-published their first album: "Rock ‘N’ Roll Beats & Electric Guitars". The album landed a spot on Sleaze Roxx’s “Top Ten Albums of 2019”. During the same year, PROSPECT played several concerts around Norway and toured in Eastern Europe. One notable concert was as support for the legendary band Backstreet Girls. In 2020 PROSPECT put their full focus on making a new album. With 10 new songs, PROSPECT went to Lydfolket Studio to record their second album, which will be published by Rob Mules Records. The album will be a testament and love letter to Rock ‘n’ Roll. ALL BETS ARE OFF - OUT NOW!!!