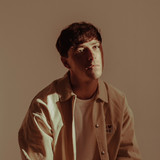 Conor Byrne is an Irish Singer-Songwriter and producer. He grew up focusing on his love of music in Kerry, Ireland and began writing at an early age. He is inspired by artists such as Damien Rice, James Bay, James Morrison and David Bowie. Conor makes contemporary pop that balances organic and electronic elements. Honing his craft over the last few years writing with and for others, he found viral success with his single "Island in the Sun” he worked on with GAMPER & DADONI, which racked up more than 25 million streams to date. He then followed up with his debut single "Bloodstream" in 2019 which was produced by Edd Holloway, who has produced for artists like Lewis Capaldi and Dean Lewis, and stands nothing short of the same success. In the past year Conor has signed with Budde Publishing and his first major record deal with Sony Music/RCA Germany. He is a fast rising talent in Europe and is definitely one to watch